State Agencies Will Not Change Unless Their Staffs Do
So we have finally made it to the legislature in communicating our concerns about the NYSDEC and the rampant misconduct occurring in the Special Licenses Unit and the Divison of Law Enforcement. The Assembly's Standing Committee for Environmental Conservation had its first meeting of the year last Tuesday, the 28th.
Must be the concerns I submitted to members of the legislature were mentioned in the meeting as the next day, the 29th, the NYSDEC started its next round of retaliation. This time they are taking a crack at one of the most vulnerable populations in the state - the indigent.
For years I have received electronic copies of responsive records for FOIL requests I've submitted to the NYSDEC. However, the day after the standing committee meeting, the Office of the General Counsel ignored my usual request for electronic records for the next two FOIL requests of mine they processed and now want to charge me over $100 forcing me to forego the electronic response I requested and take hundreds of pages of paper instead.
What environmental conservation agency takes the least environmentally friendly approach in regards to the FOIL, especially knowing, since these sociopaths totally ruined my business, I have no means of affording such fees. This is the agency using a person's indigent status against the person in denying the right of public access to agency documents. Of course, there was no answer to my question as to why, all of a sudden, the change? Never mind, I know the answer. I guess McCulley wasn't kidding when he said: "These people literally have no souls".
Soooo, here we go again! Another round of statements sent to the legislature today! We will keep plugging away until those staff members in the Department who are causing problems and acting against the public such as the staff working in the Special Licenses Unit and the Division of Law Enforcement and now the Office of the General Counsel are replaced with professionals with their heads screwed on straight and their priorities in order.
The NYSDEC's hatred towards the public has become extreme as they are rarely if ever, held accountable. The NYSDEC is a perfect example of an authority in our country that gets a blank check to do whatever it feels like doing. This is how so many countries start their wayward plunge into tyranny.  Unfortunately, it looks like this one is well on its way! 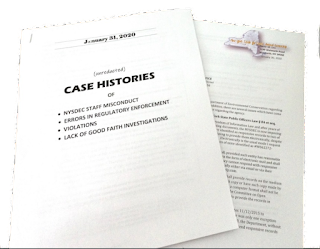 ALBANY, N.Y. – Governor Cuomo signed into law a first-of-its-kind bill that bans the sale and possession with intent to sell of parts of any species threatened with extinction. The new law embraces the precautionary principle of protecting species before they reach the brink of extinction.

As the fourth largest illegal trade in the world, wildlife trafficking is driving our extinction crisis. One million species are currently at risk of extinction due to human activities, as indicated by a recent Intergovernmental Science-Policy Platform on Biodiversity and Ecosystem Services (IPBES) report.

A statement follows from Rich Schrader, New York Political Director at the Natural Resources Defense Council (NRDC):
“Signing this nation-leading bill into law catapults New York into a league of its own in the fight to protect our biodiversity. New York is now in a strong position to tackle the unsustainable nature of wildlife trade that is contributing to our extinction crisis. The inclusiveness of this bill reflects the urgency of protecting most – if not all – of the earth’s wildlife and sets a trailblazing precedent for other states to follow.”

For more background, read: One Million Species Extinctions? Not on New York’s Watch!

The Natural Resources Defense Council (NRDC) is an international nonprofit environmental organization with more than 3 million members and online activists. Since 1970, our lawyers, scientists, and other environmental specialists have worked to protect the world's natural resources, public health, and the environment. NRDC has offices in New York City, Washington, D.C., Los Angeles, San Francisco, Chicago, Bozeman, MT, and Beijing. Visit us at www.nrdc.org and follow us on Twitter @NRDC.
​
Other Articles/Press Releases about this topic:
Giraffes Get New Protections, but Will It Be Enough?
U.S. to Consider Listing Giraffes as Endangered Species


Posted by New York State for Exotic Animal Ownership at December 19, 2019 No comments:
Email ThisBlogThis!Share to TwitterShare to FacebookShare to Pinterest

CONGRATS to our neighbor!

Boston, MA - A coalition of leading wildlife protection organizations is applauding MassWildlife staff and the Massachusetts Fisheries and Wildlife Board for their vote today to ban wildlife killing contests in the Commonwealth.

The vote will bring an end to events like the ones recently held on Cape Cod and in Granby, in which participants competed to kill the largest, smallest, or the greatest number of animals for cash and prizes. Winners of wildlife killing contests often proudly post photos and videos on social media that show them posing with piles of dead animals, often before disposing of the animals in “carcass dumps” away from the public eye. When proposing this ban in July 2019, the Massachusetts Division of Fisheries and Wildlife noted growing outrage in Massachusetts about these cruel and unethical contests.

“Upon learning about these unsporting contests, Massachusetts citizens made it clear that they would not tolerate these killing competitions in their state, contacting MassWildlife by the hundreds to voice their opposition,” said Elizabeth Magner, Ph.D., animal advocacy specialist for the Massachusetts Society for the Prevention of Cruelty to Animals (MSPCA). “The MSPCA is grateful that MassWildlife staff and the Fisheries and Wildlife Board treated this matter with the seriousness that it warrants, and for positioning Massachusetts as a national leader on this issue."

“Wildlife killing contests are a bloodsport just like dogfighting and cockfighting, which have been outlawed nationwide,” said Katie Stennes, programs, and communications manager for Project Coyote. “We commend the Massachusetts Fisheries and Wildlife Board for relegating these ecologically and ethically indefensible events to the history books.”

“Wild animals play an important role in their ecosystem and our environment,” said Stephanie Harris, senior legislative affairs manager for the Animal Legal Defense Fund. “The forward-thinking, science-based regulations adopted by MassWildlife and the Fisheries and Wildlife Board to prohibit senseless killing contests and wanton waste are among the nation’s strongest.

“Participants of wildlife killing contests often use unsporting and cruel techniques -  such as calling devices that mimic the sound of prey or even pups in distress - so that they can lure shy coyotes and foxes to shoot at close range,” said Laura Hagen, Massachusetts state director for the Humane Society of the United States. “We thank MassWildlife for taking decisive action to ensure that the Commonwealth no longer supports such barbaric and wasteful killing of its treasured wildlife.”

Wildlife agencies and professionals across the country have expressed concerns about killing contests not only because they reflect badly on responsible sportsmen and sportswomen, but because they also contravene modern, science-based wildlife management principles. In 2018, more than 70 renowned conservation scientists issued a statement citing peer-reviewed science that refutes claims that indiscriminately killing coyotes permanently limits coyote populations, increases the number of deer or other game species for hunters, or reduces conflicts with humans, pets or livestock. In fact, by disrupting coyote pack structure, randomly shooting coyotes may increase their populations and lead to more conflicts. Nonlethal, preventive measures are most effective at reducing conflicts with wildlife.

Wildlife killing contests are also destructive to healthy ecosystems, within which all wildlife species play a crucial role. Coyotes and foxes in particular provide a range of ecosystem benefits, including controlling rabbit and rodent populations and restricting rodent- and tick-borne disease transmission.

In just the past five years, California, Vermont, New Mexico and Arizona have taken a stand against cruel, unsporting and wasteful wildlife killing contests. California banned the awarding of prizes for killing furbearing and nongame mammals in 2014; New Mexico and Vermont outlawed coyote killing contests in 2019 and 2018, respectively; and Arizona prohibited the events for predatory and furbearing species this year.
# # #

The New York State equivalent for these bills mandating an end to all wildlife killing contests is A03661/A07722 and S04074. The full text of the bill may be seen at https://nyassembly.gov/leg/?term=2013&bn=S04074 as well as the voting record among legislators. The bill has made it to committee and still pending.

It’s comical to hear the latter accuse the former as the ones who are dividing the industry or are the ones causing greater restrictions on industry activity.  The reason for the difficulty in respecting such a statement is the fact that the former group isn’t involved or associated with the very government bodies threatening the industry; the latter is.

Upon becoming familiar with the “who’s who” in the industry, it isn’t difficult to see the ones who actively challenge the State and Federal governments concerning unjust restrictions and other issues detrimental to our industry.  Needlesstosay, they are not the ones cooperating with the government and providing the wind behind its wings in passing more and more unconstitutional restrictions.

The other side is plagued with con artists and their belligerent supporters and families.   They are closely associated with government departments for natural resources.  In New York State, this is the Department of Environmental Conservation, or “DEC”.

The whole purpose of the cons to associate themselves with the government is to reap favor and thus be considered above the law.  Such a practice assists such people in their businesses in that they will often be rewarded with free animals from the menageries of businesses the government destroys.  Cons are also not restricted as the rest of the industry is in that their animals do not have to be licensed the same way nor are activities involving them.

The one thing clearly damaging to the industry is the cons' tendency to go along with “fake law” espoused by the state, especially here in New York State.  One example is the licensing of non-indigenous species by the Department.  It’s expected for a non-con to license with the state non-indigenous animals, yet the cons do not have to do so.  Yet, the cons tell others in the industry it’s illegal not to do so.  Such an indication to other industry members is highly inappropriate not only because it is a misrepresentation of the law but also the cons are not authorities in the industry and thus are stepping far past their own ethical and professional boundaries in remanding specific (often non-existent) restrictions on non-cons while they baldly carry on with business as if they are not subject to the same restrictions.

The most disheartening thing of all is the number of people who follow such morally bankrupt people as the cons and do so blindly.   In our society which we prize as progressive and educated, it is surprising to see the number of people who, without possession of facts or the will to carry on research, blindly follow the cons in the crimes and misconduct they perpetrate against the good members of the industry.

This is why it is imperative for the good in the industry to continue and challenge the DEC and their minions at every step of the way in the most effective manner possible.  While doing so, they should not be surprised when they get far enough in enemy territory where they will remove the mask of the real enemy: the industry itself.